Skip to the content
HomeBiographyA Closer Look at Bayard Rustin 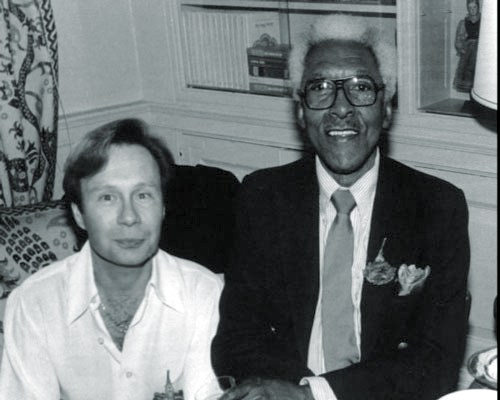 A Closer Look at Bayard Rustin

[Walter Naegle was Bayard Rustin’s partner from 1977 until Rustin’s death in 1987; he is executor and archivist of the Bayard Rustin Estate.]

For more than 50 years, Bayard Rustin was a strategist and activist in the struggle for human rights and economic justice. Born in 1912, he grew up in West Chester, Pennsylvania, where he excelled as a student, athlete and musician. While he never received his B.A., Rustin attended Wilberforce University, Cheyney State College, and the City College of New York. He earned money for tuition by working at odd jobs and singing with Josh White’s Carolinians.Raised as a Quaker, Rustin began his lifelong career as a social and political activist in 1937, when he moved to New York after completing an activist training program of the American Friends Service Committee. At City College, he became an organizer for the Young Communist League, which hired him as a youth organizer to work on the problem of racial segregation and to advocate an anti-war position. Rustin quit the League in 1941, after the Communist Party changed its organizing focus due to the war in Europe.

He began to work with A. Philip Randolph, president of The Brotherhood of Sleeping Car Porters, the premier black trade union. Simultaneously, he began a long association with the Fellowship of Reconciliation (FOR). Serving as its Race Relations Secretary, he toured the country conducting Race Relations Institutes designed to facilitate communication and understanding among racial groups. He was active in Randolph’s March on Washington Movement, and became the first field secretary of the Congress of Racial Equality (CORE). In 1942 he was dispatched to California by the FOR and the American Friends Service Committee to help protect the property of Japanese-Americans imprisoned in internment camps. During this time he also became acquainted with Norman Thomas, a leader in the democratic socialist movement in America. Rustin remained a democratic socialist throughout his life, and became staunchly anti-Communist after his disillusionment with the party.

As a committed pacifist, Rustin refused to register for the draft, and also declined to perform alternative service in one of the Civilian Public Service camps set up for Quakers and other religious pacifists. He served three years in federal penitentiary, beginning in 1943, as a way of protesting the war. In 1947, under the auspices of the FOR and CORE, Bayard Rustin helped plan the first “freedom ride” in the South, challenging Jim Crow practices that had been made illegal by a 1946 Supreme Court decision outlawing discrimination in interstate travel. Known as the Journey of Reconciliation, riders engaged in direct protest by intentionally violating the segregated seating patterns on Southern buses and trains. Along the way, they were beaten, arrested and fined. Arrested in North Carolina, Rustin served 22 days on a chain gang. His account of that experience, serialized in The New York Post, spurred an investigation that contributed to the abolition of chain gangs in North Carolina. The Journey was the prototype for the Freedom Rides of the early 1960s. In the late 1940s, Mr. Rustin was instrumental in securing President Truman’s order eliminating segregation in the armed forces.

While working to promote democracy at home, Bayard Rustin also supported human rights struggles worldwide. In 1945 he organized the FOR’s Free India Committee, which championed India’s fight for independence from Great Britain. Following the example of Gandhi, whose methods he studied during visits to India, he was frequently arrested for protesting Britain’s colonial rule in Africa. In the early 1950s, he consulted with Prime Minister Kwame Nkrumah of Ghana and Nnamdi Azikiwe of Nigeria, both leaders in their countries’ independence movements. At home, he helped organize the Committee to Support South African Resistance in 1951, which later became the American Committee on Africa.As a gay man, relatively open for his time, Bayard Rustin experienced anti-gay prejudice in addition to racial discrimination. Because of his sexual orientation as well as his controversial political positions, he was often relegated to a behind-the-scenes role in various campaigns. Arrested in 1953 on a “morals charge,” he lost his job at the FOR, but found work with another anti-war group, the War Resisters League.

In 1956, at Mr. Randolph’s request, he was granted temporary leave from his position to assist Dr. Martin Luther King, Jr. in the early days of the Montgomery Bus Boycott. His extensive background in the theory, strategies, and tactics of nonviolent direction action proved invaluable to Dr. King.Mr. Rustin organized the Prayer Pilgrimage for Freedom in 1957, The National Youth Marches for Integrated Schools in 1958 and 1959, and was the Deputy Director and chief organizer of the 1963 March on Washington for Jobs and Freedom which, at that time, was the largest demonstration in the nation’s history. Thought by many to be the high point of the Civil Rights movement, the March on Washington served as the platform for Dr. Kings historic “I Have a Dream” speech and helped secure pending civil rights legislation.

In 1964 Bayard Rustin helped found the A. Philip Randolph Institute (APRI), named for his mentor. The Institute has 200 local affiliates involved in voter registration drives and programs designed to strengthen relations between the black community and the labor movement.A longtime supporter of workers’ rights, Mr. Rustin participated in many strikes and was a staunch ally to organized labor. During the mid-1960s he participated in the formation of the Recruitment and Training Program (R-T-P, Inc.), which successfully increased minority participation in the building and construction trades.Mr. Rustin had a long involvement with refugee affairs. As a Vice Chairman of the International Rescue Committee, he traveled the world working to secure food, medical care, education, and proper resettlement for refugees. His visits to Southeast Asia helped to bring the plight of the Vietnamese “boat people” to the attention of the American public. In 1980 he took part in the international March for Survival on the Thai-Cambodian border. In 1982, he also helped found the National Emergency Coalition for Haitian Refugees.As Chairman of the Executive Committee of Freedom House, an agency which monitors international freedom and human rights, Mr. Rustin observed elections in Zimbabwe, El Salvador, and Grenada. His last mission abroad, coordinated by Freedom House, was a delegation to Haiti to help create democratic reform in that country.

In 1983, Mr. Rustin and two colleagues made a fact-finding visit to South Africa. Their report, South Africa: Is Peaceful Change Possible? led to the formation of Project South Africa, a program that sought to broaden Americans’ support of groups within South Africa working for democracy through peaceful means.Late in life, Bayard Rustin gave numerous interviews discussing how anti-gay prejudice had affected his life’s work. He was invited to address gay and lesbian groups and testified on behalf of New York City’s gay rights bill.A collection of Mr. Rustin’s essays, Down the Line, was published in 1971. In 1976, he delivered the Radner Lecture at Columbia University. It was published under the title Strategies for Freedom: The Changing Patterns of Black Protest. He made three recordings of songs which have been reissued by The Bayard Rustin Fund, Inc. and are available from the address below. The recordings include spirituals, work and freedom songs, and Elizabethan songs.

At the time of his death, Bayard Rustin was Co-Chairman of the A. Philip Randolph Institute and President of the A. Philip Randolph Educational Fund. He was Chairman of Social Democrats USA, a member of the United States Holocaust Memorial Council, and a life member of Actors’ Equity. He also served on numerous boards and committees, and was the recipient of more than a dozen honorary doctorates.